Time to flirt – with the next level of production!

A customer calls with an urgent order. You type on your mobile phone – and it’s being produced. Your production is digitally connected. Thanks to the TRUMPF solution TruConnect it works smoothly without you. Design your Smart Factory step by step: Modular solutions bring efficient workflows and a continuous flow of information into your production. The starting point for all considerations lies in your development possibilities and objectives. We will support you with the proper consultation.

TruConnect – your route to connected manufacturing.

Smaller batch sizes and greater variety: it is getting increasingly harder to maintain an overview and keep a handle on costs, particularly when the outlay for indirect processes is going through the roof. This is precisely where networking provides an opportunity. TruConnect accompanies you on the road to connected manufacturing, helping you to optimize your overall process strategy.

Why connected manufacturing? - Small batch sizes is the trend.

Increasing customization is transforming the industry. Big batch sizes are a thing of the past. Today, variety is increasing and batch sizes are shrinking. That translates into many orders with small batch sizes. However, upstream and downstream tasks remain the same. The expense for these indirect processes is getting out of control. How do you deal with the rising costs? TruConnect helps you to optimize upstream and downstream processes. The advantage: you can manufacture even small batch sizes profitably. So even the smallest job becomes cost effective again.

How you benefit from TruConnect? - Connected manufacturing is more cost effective.

Pure processing times can be significantly reduced with productive and reliable machines and coordinated automation solutions. However, you should not lose sight of indirect processes, as they take up the lion’s share of production time today.

For you, this means that the entire manufacturing process counts and that the greatest potential actually resides in indirect processes. This includes upstream and downstream tasks such as programming, job preparation, intralogistics, and invoicing.

TruConnect allows you to optimize your indirect processes

TruConnect helps you to not only manufacture small batch sizes cost effectively but also to reduce your expenditure across the board. As a result, you are ideally prepared for:

Your advantage: An experienced partner; TRUMPF

In choosing TRUMPF, you gain an experienced partner for implementing your Smart Factory. TRUMPF has played a role in shaping the concept of Industry 4.0 from the beginning and has made key contributions to bringing about the production of the future. For over ten years, we have also been consulting customers about lean manufacturing based on SYNCHRO. TruConnect enriches this approach, as intelligent digitalization and connection make lean production even more efficient and flexible.

This business takes the checkered flag 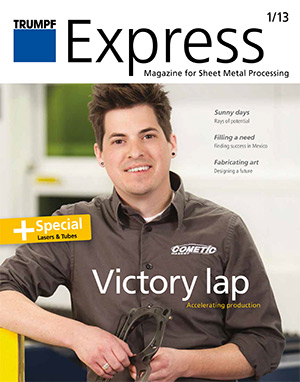 In 1989, Bob Gorman was working for a piston manufacturer when he discovered a need for gaskets. Recognizing he could start his own company and fulfill the need himself, he convinced business partner, Greg Poe, and established Cometic Gasket. When juggling a full time job and a new business venture became too difficult, Bob left the piston company to pursue gasket manufacturing full time. Today, Bob keeps the business flourishing with his sales and marketing prowess while his son, Jeff stays focused on manufacturing. "We have a good relationship. Even though it is work, we have a lot of fun," says Jeff Gorman, Operations Manager.

working." He continues, "I connect with and appreciate that. It is a mentality we share." Whenever Cometic Gasket releases a product, there are often slight variations due to varying engine designs or other factors. Since Jeff and his staff frequently tweak products to the customer's specifications, the company maintains more than 20,000 active part numbers, 12,000 which are laser cut. Since the industry changes often, race teams are renowned for requiring new prototypes. "A design will be hot one year, but then disappear. We must limit inventory and stand
ready to adapt." Jeff continues, "We just can't get away from the flexibility of the laser."

Initially, the company focused on manufacturing gaskets for motorcycles and snowmobiles, but as the company matured and new clients were secured, things began to change. "Technology for the automotive industry was quite a bit different than we were use to with the motorcycles.
It helped us to mature as a company and put us on the map." By 2001, business was booming as the focus expanded to include the automotive performance aftermarket. "Powersports are still a big part of what we do, but that's our bread and butter now," explains Jeff. Cometic Gasket is an exclusive NASCAR Performance® product and a technical partner with many race teams, including Richard Childress Racing, Roush Yates Engines, and TRIAD, so it must keep pace with the rapid technology changes of this market. With so many different parts, it was impractical for the company to tool up and stamp every one, and water jets could not guarantee the part quality required at this level. "It was clear we needed to get into laser cutting for stainless steel products. We needed the flexibility, accuracy and cut quality." Laser cutting was the only choice.

Jeff remembers purchasing the company's first laser machine, a TRUMPF TC L2530 PLUS (TruLaser 2525), in 2004. "We were told lasers tend to multiply but we knew how fast it would run and thought we would be set for a long time. I was wrong and soon calling to add another one." Since the volume of work supports continual investment, Cometic Gasket has been able to add a new laser  every few years. "We have shopped all the major manufacturers but when we visit TRUMPF, everyone is passionate about what they do. (They are) family oriented, honest and hard Portra it working." He continues, "I connect with and appreciate that. It is a mentality we share." Whenever Cometic Gasket releases a product, there are often slight variations due to varying engine designs or other factors. Since Jeff and his staff frequently tweak products to the customer's specifications, the company maintains more than 20,000 active part numbers, 12,000 which are laser cut. Since the industry changes often, race teams are renowned for requiring new prototypes. "A design will be hot one year, but then disappear. We must limit inventory and stand ready to adapt." Jeff continues, "We just can't get away from the flexibility of the laser."
Developing a new sealing solution alongside a NASCAR® team was one of Jeff's favorite projects. An engine will undergo many changes
relative to fastener locations, clamping load on the cylinder head, or other adjustments that will inherently alter the way the gasket
functions. In this case, the team began by adjusting coolant flow. For a month, the NASCAR® team went back and forth with
variations to the same part. Jeff and his team took the design files and got to work, shipping several new parts every day. Cometic Gasket
reacted quickly to each adjustment until the team had a design that worked. "I don't think it would've been possible without laser technology,"
Jeff says, "It definitely helped us strengthen that partnership." In the end, Jeff enjoyed watching the result of the hard work on TV. "It's exciting to see the guys come out in a championship caliber car and be competitive – and nerve wracking!" 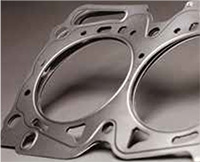 Although technology is often developed for race teams, Cometic Gasket often applies the concepts to street racing or motorcycles. With roughly 80 employees, there are even a few internal enthusiasts who take advantage of the technology at hand. Since the company supplies all levels of customers including retail, warehouses, race teams, and kids from down the street, the projects can be unpredictable and a juggling act often ensues. Using the TruTops software, the programmers nest between 80-120 jobs and roughly ten different types of material a day. Although material tends to be similar, they nest each part as it arrives so every sheet is a different. "When customers take a plant tour, they are often surprised two men program all the parts to run three shifts, 24 hours a day." Jeff explains, "Our TruTops programmers operate like air traffic control, and they work the software hard." "We often have NASCAR® parts cut right alongside those for a kid's dirt bike. It doesn't
matter who you are or what type of gasket you need, we use the best technology." This includes the company's most recent investment, the
TruLaser 1030 fiber, which was added to the shop roughly a year ago. "We always strive for the best technology, and especially for our type of products, this laser is the next big thing. We wanted to be first in line." Jeff credits the design of the new machine with solving problems that were inherent ten years ago. "There is simply less to go wrong with fewer moving parts. Its consistency is automatic and the increase in cut quality and reliability is tenfold. It just runs." Regardless of where the product will be used, manufacturing high-quality gaskets is a way of life and a sense of pride for Jeff and the others at Cometic Gasket. "I like projects where the customer refers to it by a code name and we don't know where the part is going. We just look at it and try to imagine where it might end up." The possibilities seem endless for Cometic Gasket as well.

Our business was able to find the ideal machine tools for our shop. Productivity, quality, efficiency have been raised across the board.